This week I’ll be looking at some new data out by the Office for National Statistics about the use of social networks in the UK.

A new survey carried out by the Government showed 33 million current UK internet users log on to social network sites on a daily basis. That’s double the amount compared to just seven years ago, and represents 57% of the population.

Indeed, the UK was only beaten by the Netherlands (65%) in the proportion of people using social networks. 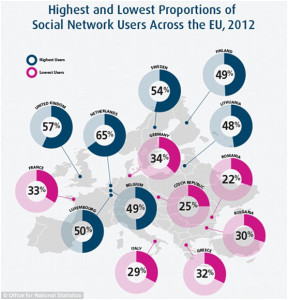 As part of the research, people surveyed were asked what they used the internet for in the previous thre months – with one of the options being social networks. The ONS found that there was little difference between the answers of men and women, but huge differences in age groups. 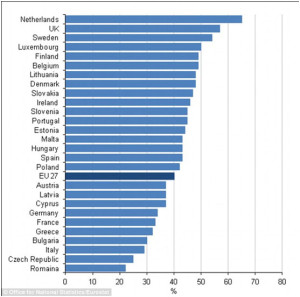 One of the factors for such a rapid rise in the use of social networking is the use of mobiles (mobile or smart phone, PDA, MP3 player, e-book reader or handheld game console). The ONS said more than half (52%) of adults in the UK accessed the intenet via the mobile device in 2012, with two thirds of those doing so to use social network sites.