British people around the world will still be on a high after the sporting successes we’ve recently enjoyed.

The Lions beat the Aussies, one of ours is also leading the Tour de France (at the time of writing), and Andy Murray ended the 77-year wait for a male singles champion at Wimbledon. The last British female to win the ladies singles tournament was Virginia Wade in 1977, for you sports buffs out there.

And I’m going to jump on the Murray bandwagon this week and look at the impact of his success on the social media networks.

According to figures published by IBM, 6.6 million Twitter messages were posted during the two-week tournament – a huge increase from the 2.5 million posted in 2012. Facebook recorded 20 million ‘likes’ on subjects surrounding the tournament.

Focusing on the champion himself, Andy Murray was the subject of two million Google searches on July 7 – the day he won the final, while his girlfriend Kim Sears was searched for around 500,000 times.

The Brit’s Facebook page gained 1.3 million new likes, over the course of the championship – easily beaten by tournament runner-up Novak Djokovic, who gained 3.1 million new likes. The same trend was found for the women finalists too – with runner-up Sabine Lisicki gaining 290,000 likes compared with Marion Bartoli’s 18,412. 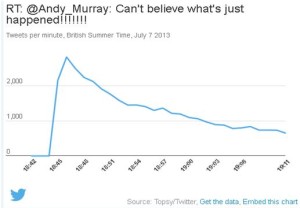 There really are few things that get people talking more than sport, so it’s ace that the discussion on social media networks on Sunday were celebrating Murray’s success rather than another heartbreaking defeat like last year.