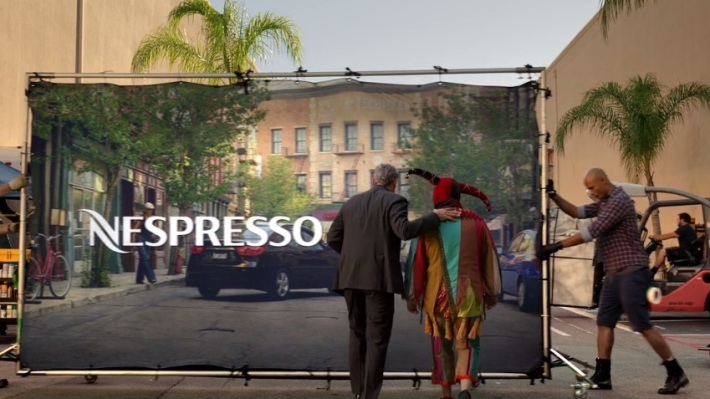 George Clooney, everyone’s favorite coffee connoisseur in Europe, becomes the Nespresso envoy to the United States in a playful spot co-starring Dani DeVito. Known for his tawdry take on comedy, DeVito is an unexpected costar to promote what has long been considered a sophisticated commodity. However, juxtaposing the polished and the sordid is exactly what this advert aims to do.

During a movie set coffee break Clooney, dressed as a gallant general, and DeVito, dressed as a gauche Napoleon, encounter one another while picking up a cup a joe. Clooney opts for a Nespresso while Dani DeVito unenthusiastically pours himself a regular cup of watered-down drip coffee. After scanning the panorama where a number of glamorous Hollywood actors cue for Nespresso as opposed to the small number of misfits waiting in line for conventional coffee, DeVito decides that it is time for a lifestyle change and approaches Clooney for guidance.

In order to turn DeVito into a cultivated coffee consumer, Clooney puts DeVito through a cultural bootcamp. On average, DeVito proves he is a true philistine and performs poorly, committing a number of unseemly faux pas. But Clooney finally succeeds and turns DeVito into a bonafide sophisticate while metaphorically implying that American coffee culture is ready for the finer art of coffee consumption. Nespresso’s tagline, “Experience a cup above”, precisely summarizes this point of taking coffee to a higher level.

To see how George Clooney and Dani DeVito present Nespresso to the U.S. market I highly recommend you check out this spot.

And for more on Nespresso’s campaigns, I encourage you to read a previous blog post on one of their adverts from November 2014.